Here you will find the various maps that make up the game world. 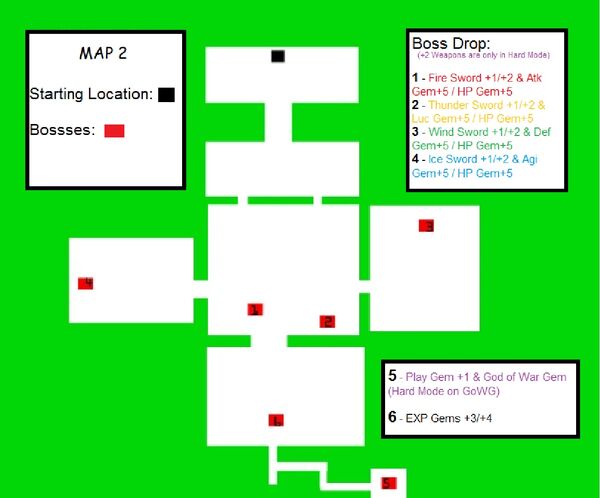 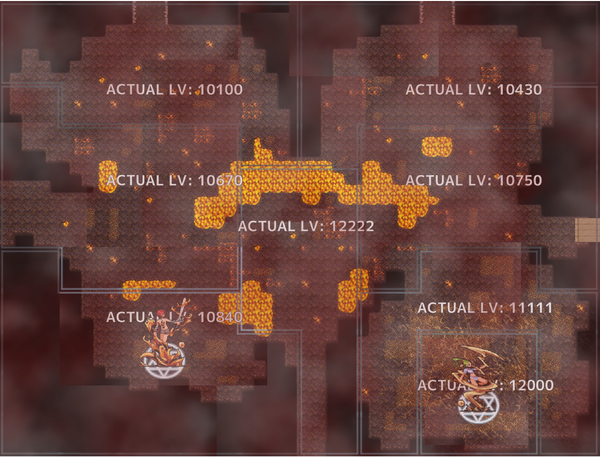 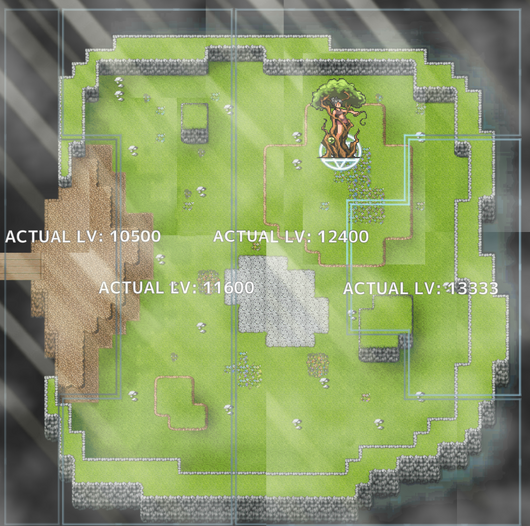 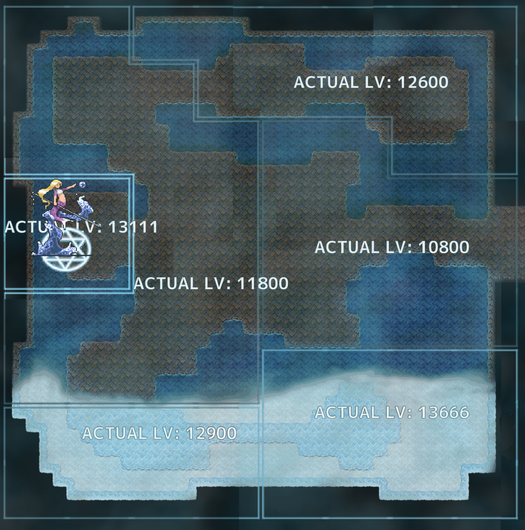 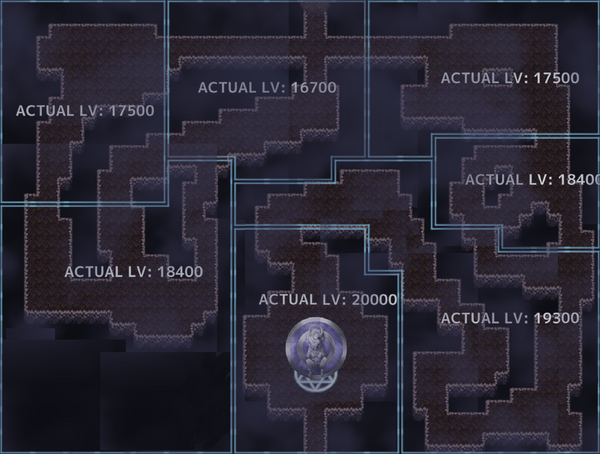 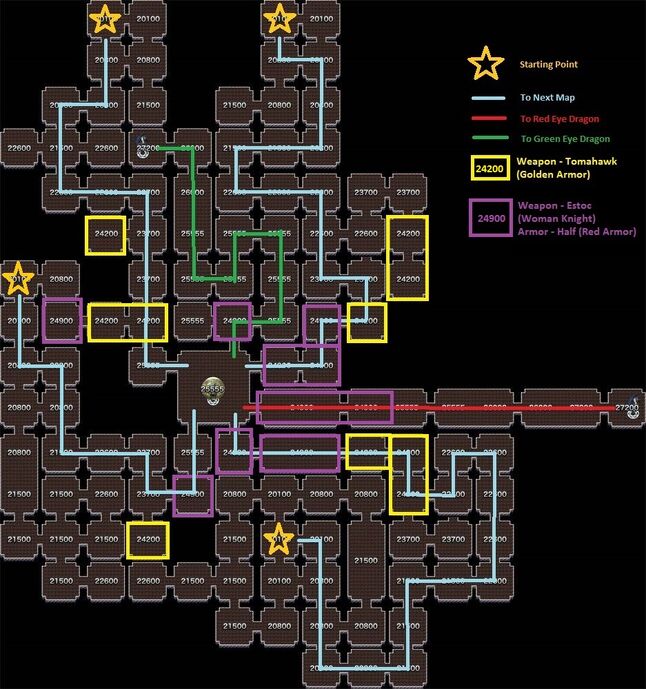 Maze is composed of very similar 2x2 squares maps, and locating where you spawn can be a bit tricky the first times, but here's a little way of recognizing all 4 spawning locations:

After locating yourself on the map, just follow the path to the center!

The Chaos Grid is a 7x7 Grid with 7 possible "shared" bonuses, which follows the standard Sudoku rules, where there can be no copy of the same Bonus in the same row or column. Chaos Grid is the only possible location for the (!?) Bonus to spawn, a bonus giving you a moderate (26%) chance to encounter Tsukuyomi.

When you're able to reach Chaos Grid easily, it is the best area to use your Daily Bonuses on, because you will generate 7 different bonuses, with a high percentage chance of one of them being (!?).

Below is considered the most efficient route to check for the 7 bonus changes. 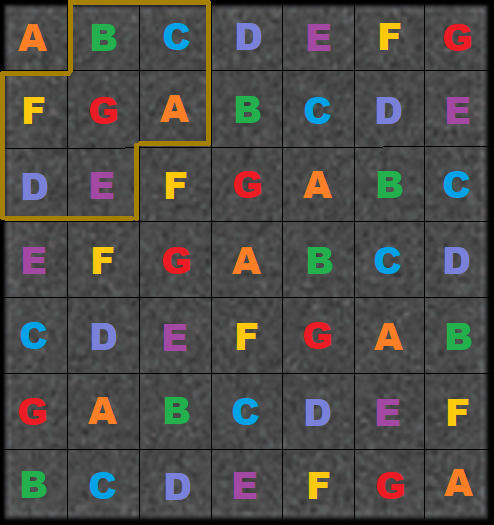 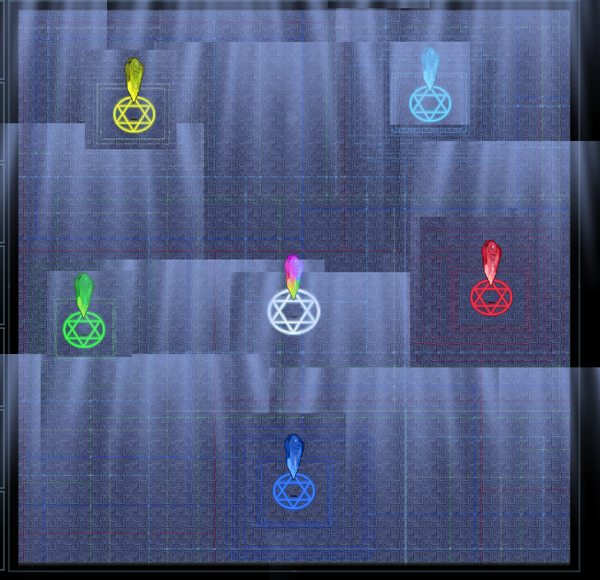 The Crystal Bosses on this map can drop several of the best items in the game from all categories depending on which enemy you face. They are, of course, substantially stronger than the regular enemies you face on this map. A warning, that if you defeat the center Hero Crystal, you will be teleported to Heaven. 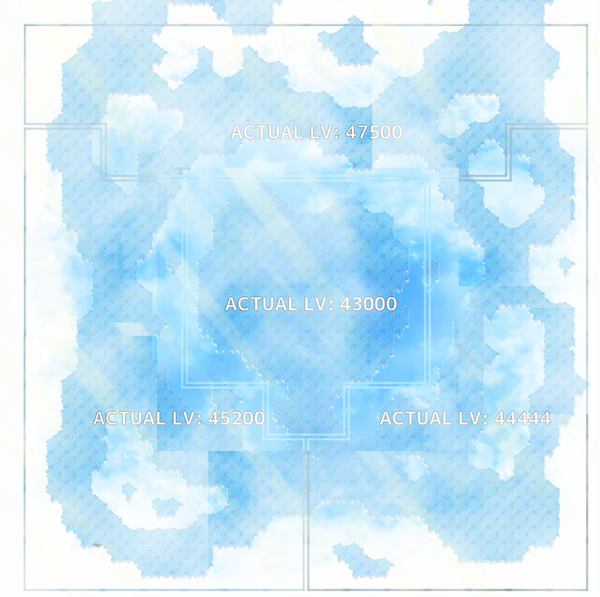 Here lies some of the strongest weapons such as the Estoc+1 in the 44,444 and 45,200 areas, one of the best scaling weapons in the game and thus an amazing late-game weapon.
Another notable mention would be the Crystal Hammer in the 47,500 Field as it is a good midgame weapon.
You can find the second-best early game Armor in the 43,000 Field, the Crystal Cape. The best is the Four gods/Green Armor, which drops in the 58,000 zone from the boss Byakko or the regular Green Serpents.

After Kouryuu falls, you are transported to an area affectionately known as the "Highway to Hell".

You will reach a split in the road at Lv180,000 area, and will need to choose which boss you want to go for, since defeating either one will send you to the "Twilight map".

[Speculation\ It has been suggested that the area above the Archangels is part of an unfinished map. But looking at the map on the right "From the source code" It would just seem to be a visual effect that they added in.]

These Bosses have been added to the boss page already so that people can see what their stats are and plan accordingly.

Be forewarned that the Boss's stats are much higher than any of the enemies around them. They are very difficult (especially the right one), The angels that spawn around them are a decent source of EXP if you don't get the Crystal Horse or Adult Angels that may kill you.

Working your way up slowly is your best chance at survival and clearing this area. Due to the fact that this area has a greater level gap than from the moment you start the fight against Kouryuu. Get to learn what stats are important for you and know how much you need for each area.

[Note from Duskbringer \ This game seems amazing and it is sad there is not a big community net. I've been playing nonstop for the last month since I got it and it still looks like I havent even explored 10% of it. (Remember to take a brea-----k though for a while though, it can get frustrating still)

Many thanks to the ppl who keep the wiki running!]

[Note from Homm \ The one on the right path is much stronger - she hits like a truck. I was able to kill her with A LOT of luck (not the 'LUC' stat, just my own luck), Combo&Crit bonus, revival necklace, 450k level (in Normal Mode of course).

If you have difficulty go and get some weapons which are at least 450% scaling from hard mode and the Stat Point Crystal from Normal mode (!) area (Gaia). It will be much easier. I have found that you need around 1.6x more levels to beat Gabriel than what's required to beat Michael.

After defeating one of the final Archangels, we are teleported to the Twilight map (Can only defeat one per run).

[Note from Homm \ The area is currently unfinished. At this point nothing is interesting here except for stronger enemies, and there are locations which suggest future boss(es) however none have been implemented yet.]

[Note from J.Varidel \ I just uploaded this picture of the the whole new map. Sorry if it's not very nice, I didn't have 100 BP to spend.]

You can get ported there through the (!!!) bonus from any area if you successfully encounter and kill Oculus of Providence. Once you're in, you can notice the area is lv0 and the bonus (!!!) has between 1-5 uses. Once you used all those rounds, you will be transported back to your previous location.

Here, you will meet Monoliths which don't give you much exp or gold for that matter, but occasionally drop items from the "Cursed" set of equipment.

Like Black Bonus Area works, White Bonus Area is available upon encountering and killing Lucifer from a ( ! ) bonus. Once inside, you'll be able to encounter holy monsters giving some of the best weapons and armors in the game, and the almighty StatPoint Crystal. You're sent back to the map after using every round of the ( ! ) bonus inside White Bonus Area.

Retrieved from "https://inflation-rpg.fandom.com/wiki/Maps?oldid=14840"
Community content is available under CC-BY-SA unless otherwise noted.